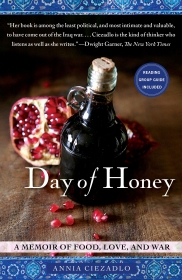 What reviewers are saying about Day of Honey:

"Her book is among the least political, and most intimate and valuable, to have come out of the Iraq war…  There are many good reasons to read “Day of Honey.” It’s a carefully researched tour through the history of Middle Eastern food. It’s filled with adrenalized scenes from war zones, scenes of narrow escapes and clandestine phone calls and frightening cultural misunderstandings.... These things wouldn’t matter much, though, if her sentences didn’t make such a sensual, smart, wired-up sound on the page.... Ms. Ciezadlo is the kind of thinker who listens as well as she writes. Her quotations from other people are often beautiful, or very funny…. Readers will feel lucky to find her. —Dwight Garner, The New York Times

“Her epicurial tour cracks open a different Iraq. She looks into its dusty cookbooks, explores its coffeehouses and savors the foods of its many regions and religious sects. Her book is full of more insight and joy than anything else I have read on Iraq.... Her writing is at times so moving that you want to cry for countries destroyed, but she writes with such wisdom that you don't fret over the future of these 4,000-year-old civilizations."—The Washington Post Book World

“In her extraordinary debut, Day of Honey: A Memoir of Food, Love, and War, Annia Ciezadlo turns food into a language, a set of signs and connections, that helps tie together a complex moving memoir of the Middle East. She interweaves her private story with portraits of memorable individuals she comes to know along the way, and with the shattering public events in Baghdad and Beirut. She does so with grace and skill, without falling into sentimentality or simple generalizations."—The Globe and Mail

“Ciezadlo's memoir is, fortunately, fascinating. And touching. Plus alternately depressing (because of the seemingly endless, senseless sectarian deaths in Iraq and Lebanon) and laugh-out-loud funny (because of the self-deprecation, not to mention the vivid portraits of unique characters such as her mother-in-law).... It would be an easy path, and maybe a wise one, to fill out the remainder of this review with direct quotations from the memoir. Ciezadlo’s writing is that good.... “Voice” is difficult to define precisely, but writers (and plenty of readers) know it when they see it. Ciezadlo's voice is marvelous."—The Christian Science Monitor

“Her writing about food is both evocative and loving; this is a woman who clearly enjoys a meal.... A glass of Iraqi tea, under Ciezadlo's gaze, is a thing of beauty."—The Associated Press

“A strange mix of sensuous writing about food, evocative first-hand reports of living life during wartime (in Iraq and Beirut), and the stresses of adapting to a new family and culture. Ciezadlo's work feels both dizzying and strangely grounded. And it makes you hungry."—The Nation

“'Day of Honey' is unabashedly complicated, piling a love story, a rollicking adventure in the journalism trade, a bold political diatribe, a subtle feminist screed, a guerrilla cookbook and a social, cultural and economic history between its covers like a ludicrous towering sandwich... Ciezadlo has a comedian's timing and a novelist's ear for dialogue."—The Daily Star (Beirut)

“Equal parts history of the Middle East, tale of cross-cultural marriage, and riveting account of life as a civilian reporter in two war zones... Day of Honey is first and foremost a paean to the powers of food, recipes included... It's a poetic, not to mention truthful, understanding of the culture Ciezadlo has chosen to steep herself in, but one of the great strengths of her book is that as enthusiastic as she is, she never loses her ability to cast a necessarily cold eye on the goings-on around her..."—Bookforum

"[S]he uses the longing for food—and its parallel desire for love and friendship—to examine the effects of long-standing war in the Middle East. With "Day of Honey," Ciezadlo's lovely, natural language succeeds where news reports often fail: She leads us to care. ...

"Day of Honey" is a delicious first book (and the recipes at its end only make it more so). May it not be Ciezadlo's last." —The Oregonian

"Ciezadlo paints memorable portraits of shopkeepers, journalists, poets, women's rights activists, restaurant owners, and the ways they cope... When Ciezadlo describes meals, I am both hungry and drunk on her words... The best books transport us to worlds outside our experience, making them both real and comprehensible. Unequivocally, this is one of those books." —The Austin Chronicle

“The title is drawn from an Arabic proverb: "Day of Honey, day of onions." That cycle of sweetness and grief, pleasure and tears suffuses every page here.... The book brims with Middle Eastern history, but it's the small details that tell the story: the Iraqi man who expounds on the greatness of Chicken Soup for the Soul; neighborhoods destroyed by war that sprout rooftop and terrace gardens; bars and cafes where Sunnis and Shiites might sit at the same table and share a meal... Day of Honey turns thoughts on food into provocative food for thought." —BookPage

“Like any successful travelogue writer, she fills her pages with luminous, funny, and stirring portraits of the places and people she came across in her time abroad... She does this all in writing that is forthright and evocative, and she reminds us that the best memoirs are kaleidoscopes that blend an author's life and larger truths to make a sparkling whole.” —Booklist (starred review)

“A mix of memoir, history, foodie narrative, and war story, this book is really quite amazing. Ciezadlo has the perfect voice for her chosen mix of topics: she's obviously intelligent, insightful yet non-judgmental, and when needed, wickedly humorous. Who knew you could learn so much about war and culture in the Middle East while contemplating the recipe for Kibbeh Nayeh? Bravo!” —Indie Bound (March 2011 Indie Next selection)

“Ciezadlo is a splendid narrator, warm and funny and more interested in others than herself... Cooking and eating are everyday comforts, and with any luck, a source of fellowship; Day of Honey is a beautiful reminder that this doesn't change even in the midst of war."—Slate

“Her fast-paced, graceful writing weaves politics into discussions of literature and cuisine to bring insight into the long history of cultural mix and transition in the Middle East, reminding us that even as war persists, our humanity helps to preserve our civilization, and our food binds our communities and our families.... A highly recommended personal perspective on political and cultural aspects of the war-riven Middle East..." —Library Journal

“A lucid memoir of life in the war-torn Middle East... Through immersion in food and cooking, Ciezadlo grounded herself amid widespread instability while gaining special insight into a people forced to endure years of bloody conflict... This ambitious and multilayered book is as much a feast for the mind as for the heart.” —Kirkus Reviews

“A gorgeous, mouthwateringly written book that convincingly demonstrates why, even with bombs going off all over the place, you gotta eat.” —Suketu Mehta, author, Maximum City: Bombay Lost and Found

“A riveting, insightful and moving story of a spirited people in wartime horror told with affection and humour. Food plays a part in the telling—unraveling layers of culture, history and civilization, revealing codes of behaviour and feelings of identity and making the book a banquet to be savored." —Claudia Roden, author, The New Book of Middle Eastern Food

“A warm, hilarious, terrifying, thrilling, insanely smart debut book that gets deep inside you and lets you see the Middle East—and the world—through profoundly humanitarian eyes. And if that weren't enough, there's also a phenomenal chapter's worth of recipes. Buy this important book. Now." —James Oseland, editor-in-chief, Saveur magazine

Annia Ciezadlo combines "mouthwatering" and the Middle East in this beautifully crafted memoir. She adds a new perspective to the region and leavens the stories of lives caught up in the tragedies of war, including her own, with recipes for understanding. She is a gifted writer and a perceptive analyst. Ciezadlo’s portraits are unforgettable." —Deborah Amos, correspondent for National Public Radio and author, Eclipse of the Sunnis: Power, Exile, and Upheaval in the Middle East

A terra-cotta bowl of chicken livers bathed in lemon juice and garlic taxied down onto the table. The others started ordering meze in combinations I’d never imagined, Jabberwocky food, portmanteau creatures from a parallel world: slices of sausage, thick like pepperoni but spicy like chorizo, stewed in sweet pomegranate syrup. Little saucers of hummus with tender spoonfuls of sautéed lamb and pine nuts nestled in their belly buttons. Tiny glasses of crystal-clear arak that clouded into milky iridescence when you added ice. A pickled baby eggplant stuffed with chopped walnuts and hot red peppers and slicked with olive oil.
“What is this?” I asked, when the eggplant appeared.
“This is makdous,” said Hanan. “It is good to eat with wine or arak.”
Who thinks of such things? What god leant down and whispered in what mortal ear to put walnuts inside an eggplant? And then to eat it with wine? I wanted to cry. I ate all four makdouses and ordered four more. The aquamarine smell of anise fogged upward from the arak.
“Should we order kibbeh nayeh?” someone asked.
Sudden quiet. Everyone looked at each other. Some shook their heads sorrowfully: don’t say we didn’t warn you. But others nodded and elbowed each other with shining, conspiratorial eyes.
A few minutes later, it appeared: raw lamb ground with spices and cracked wheat and patted into a mound the size of a large man’s hand. Scored with a fork and topped with roasted pine nuts. Hedged with raw onion slices and sprigs of mint. Hanan anointed it, pouring dark green olive oil over the small mountain until it pooled on the plate. Hands descended from all directions, one of them mine, ripping off rags of bread and tearing into the raw meat like lions. The kibbeh slid into my mouth, smooth and almost buttery, until the kick of the spices unfolded. Watching the others, I took a bite of mint and one of raw onion, and the two sharp blades of flavor tore open the bloody taste of raw lamb.
Drunker now. Hanan leaned over the table toward me. She was shouting something and smiling; I couldn’t hear. She said it again: “How do you like Beirut?”
Loading...